In 1998, I met a Canadian who changed my life radically.

"My brother is Bingle Kruger. He was a partner in an engineering company BKS and he worked with Ron Nolan, also an engineer. I met Ron from the famous Bar 5 Ranch in Canada at the Pretoria Show. When we ran into each other there, Ron was already aware of me, because Bingle told him about me. And I also knew by Bingle that Ron was an honorable businessman."

Ron saw one of my champion heifers, Toverberg Reinette, and then started talking to me. The end of this conversation was an agreement that we just scribbled on the back of the show catalogue, which led to a commitment that lasted from 1999 to 2012.

Ron Nolan was also a born stud breeder and he wanted to be the best in the world. We saw the opportunity to acquire the very best Simmentalers in South Africa and export embryos to Canada and market the genetics from there."

"According to the agreement, I would purchase the female animals in South Africa on behalf of Ron and keep them at Rietfonteinpoort. I was also responsible for procuring the very best bulls. Embryos were flushed and exported to Canada, where they were placed in recipient cows at the Bar 5 farms and where the calves were raised and sold, the marketing would center around a prestige auction where buyers from the US, Brazil and Mexico would get together. The income from the sale of the calves would be divided equally.

The agreement with BAR 5 was a huge success. To illustrate the success of the project, a bull, sent as embryo from Toverberg to Canada, was sold to Agro Zurita in Brazil. That bull later made history when Agro Zurita sold half of his shares for the world record price of $500 000 (at that time R4 million). The bull's name is Bar 5 S.A. Mr Optimal 447L. His sire is Kykso Hano and his dam Salerika Zinka 5th."

A shift in emphasis

"When I started with the Simmentalers, Germany was the main source of genetics. For about thirty years it stayed that way. With the outbreak of mad cow disease in the late eighties, however, there was a clear shift in emphasis to the milk Simmentaler in Germany, rather than dual-purpose varieties.

With this shift, it became clear worldwide that South Africa now had the best dual-purpose Simmentalers in the world. That's why Ron Nolan was at the Pretoria Show that year - he came to look for genetics. Of course, it was impossible to export seed from here. The only way was embryos and that's how we have sent South African genetics to the world for eleven years.

Bar 5's breeding policy was based on unrelated lines. They were therefore only interested in animals from South Africa, which were not at all related to their own genetics in the five-generation pedigree. After eleven years we used all the genetics available in South Africa and Namibia. Then there was nothing new I could provide to them.

Bar 5 mainly bred from offspring that came from South Africa and the genetics were so well established in their own herd that they no longer needed embryos from South Africa. As a result, the joint venture came to an end in 2012."

The wonder of embryo technology

"The use of embryo technology has obviously greatly accelerated the saturation process. Where one could normally get one calf out of a cow per year, on average we got six embryos per flush from one cow. Each cow was flushed approximately every two months, which gave us about 36 embryos per donor per year.

As a matter of fact, I flooded them with embryos and the man who buys these animals then pays a lot of money for them, so he also uses embryo technology to make as much offspring as possible from his investment.

The wonder of embryo technology, of course, is that we could do all our very best genetics without harming our own herd. We still have the very best dual-purpose genetics in the world. Embryos that could not be frozen were placed in recipient animals at Rietfonteinpoort. The same principles regarding the agreement also applied here in South Africa. The calves were sold here and the profits were shared.

The genetics I retained after the agreement came to an end are some of the best in the world. Evidence of this is the cow Toverberg Erika. Her embryos are among the very first to be exported and of the nineteen Simmentaler bulls whose seed Semex sells around the world, three of her calves are with three different bulls." 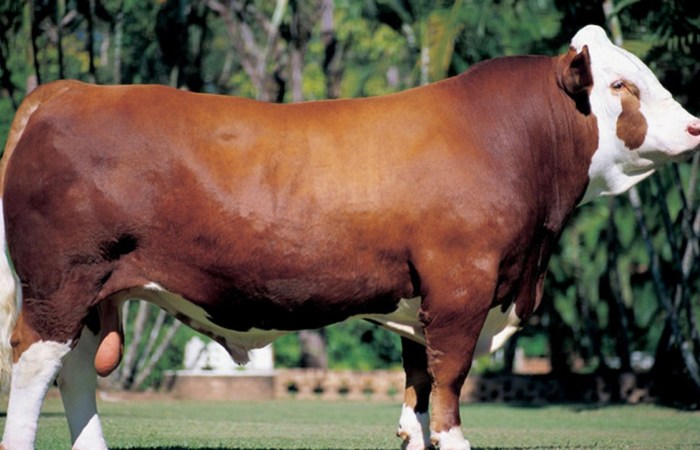